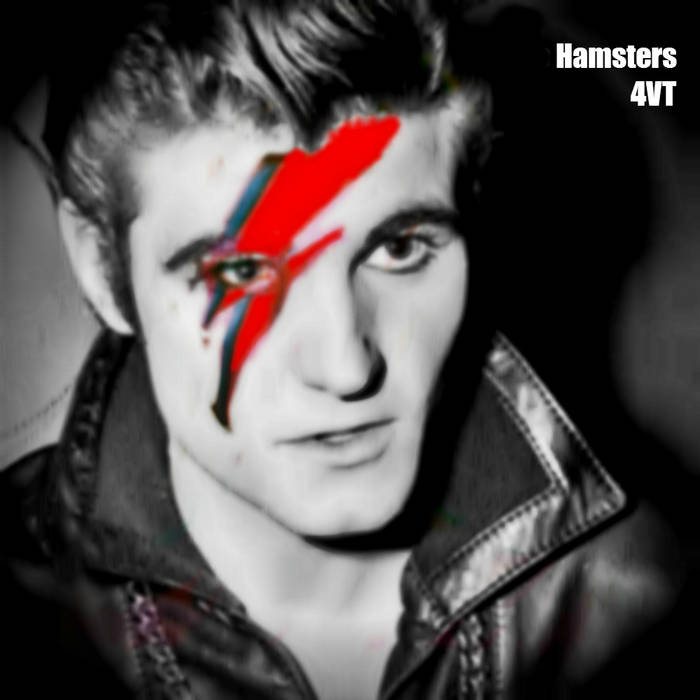 The Hamsters formed in 1980 as a reaction against the raincoat clad pseuds, whose dreadful negative tuneless drones were being given space in all the live music venues around the city. A young latter day punk rock crowd embraced them for their unquestionable ' don't care what you think ' attitude, while being puzzled by the primitive but ambitious sound collages the band created. The art-rock crowd of City Life reading chin strokers derided them as yobs , rude and very crude.

They didn't fit in , they stood apart,

Rather than this being a weakness it became the Hamsters strength , they had no one to pander to and so did what they pleased , what came natural ,

Their reputation spread , wildly differing opinions of their merits were heard , but they were on people's lips. They gained a deserved but highly exaggerated reputation for being trouble magnets and drew bans from many venues , but as doors were being slammed in their faces other doors opened , high profile gigs with the likes of Joy Division , The Fall and Orange Juice were played , guest spots around the country on the ' Weird Tales tour' with The Mob , Androids of Mu, Astronauts and Zounds spread the word nationwide.

Recordings were made , and over the years have been made available both in the UK and USA ( see the German Shepherd compilation Bloody Hell! ) but a mere 20 months after forming the Hamsters split.

There was never a Hamsters single ,

Reformed in November 2014 to play live it was decided to play some new material , a week before the first gig at the Crescent, Salford as part of the German Shepherd live weekend , 4VT was written and opened the set that momentous evening,

Now it's been taken into Simon ' Ding' Archers 6 db studio in Salford , belted out with gusto and without further ado is presented to you ,

Greater Manchester Based independent, not for profit, record label offering a variety of eclectic music for your listening pleasure

Different Noises For Your Ears.

Track Name: 4VT
His eyes were green , when he saw blue gene , he had to join the game
He knew Tommy Steele, was not for real, went to London and changed his name
He couldn't sing, but he sure could swing, and wasn't afraid to shock
He dressed in black , like a Cadillac, and his playboys could really rock

Sound check kill, change of bill, Olympia has a star
Rip up the stage , see him rage , and move to electric guitar
Howl and crawl , bounce off walls , and dance like a tiger on ice
Here and now, pop art slam pow , as sharp as a knife

He lost his noise, and his poise, rambled under the lights
Got big too quick, it made him sick, a strange compelling sight
The riots stopped , he was dropped , dressed in robes he preached
He still wired, a failed messiah, became a legend on the streets

Vince was wild and Vince was strange
Made love with his ego , was deranged
Sweet hands were crushed, fading glory
Then David Bowie told his story

Bandcamp Daily  your guide to the world of Bandcamp

Featuring Oakland sounds from the Smart Bomb collective and Samplelov.